After spending two weeks travelling around California and sampling all the various places it has to offer, we decide that for our final stop we needed somewhere totally different but also somewhere that would not fall short of our expectations following all the amazing places we had already been. After much (i.e. basically none) deliberation, the answer was clear: Las Vegas.

I had been to Vegas but I was about 14 years old at the time, so I was keen to go back and experience it properly and Emma had never been before so we were both pretty new to the city. We decided that to get a feel for lots of different hotels, we would stay in a different one each night. By the time we got to Vegas we had already done quite a lot of moving round and travelling so in hindsight this was not the best approach for the end of our trip. Having said that, it was very fun to explore the different hotels and rate them all against each other. We got great deals on all of our hotels even though we were there at the weekend by researching lots of websites. We found the offers we eventually went to on booking.com and lastminute.com. We stayed at The Palms on the first night, Mandalay Bay on the second and Caesars on the third and we paid about £300 in total for the two of us, which I thought was pretty great given the calibre of the hotels. Mandalay Bay was definitely my favourite as a guest (the pool and beach facilities are amazing and the service was great) but Caesars was also great as a place to visit for food and shopping (although I have to say, I was distinctly unimpressed with the service as a guest after we waited over an hour to check in). The Palms was good but it really wasn’t on the same scale as the other two.

As I already mentioned we stayed at Caesars, Mandalay Bay and The Palms. In addition to this we went to The Bellagio, Luxor, Excalibur, New York New York and the Venetian to explore. The hotels are such a spectacle that spending time looking around them could keep you amused for days! After staying at a few hotels and exploring a few others, I think I would stay at Mandalay Bay on my next trip: the pool and beach facilities were amazing and the room was lovely. The aquarium was a bit small for the cost ($15) but it was still cool to go to an aquarium in your hotel. 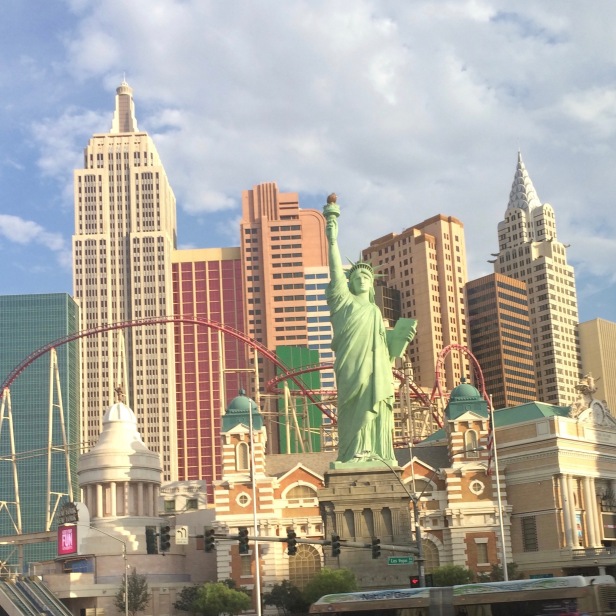 There are SO many restaurants in Vegas with options from all over the world; you really are spoiled for choice. My favourite meal that we had was at Gallagher’s Steakhouse in New York New York where I had the Filet Mignon (fillet steak) with mushroom sauce. It was A-MA-ZING and I would even go as far as to say it was the best meal I had in America.

All of the big hotels have a number of restaurants to choose from to suit any budget; finding somewhere to eat will never be an issue!

The shopping in Vegas is amazing. We spent a lot of time wandering around the various malls and looking at a lot of things that we could definitely not afford. Caesars and the Venetian were our main haunts for this kind of shopping. The Bellagio also has a huge range of designer shops. Caesars is my favourite mall though – I love the style and the decoration; it’s so easy to believe you’re really in Rome!

For affordable shopping, I would recommend Fashion Show which is a huge mall at the end of the strip. We also went to an outlet mall but we weren’t impressed – it was really far away so the taxi was $30 and we didn’t like the shops very much. As it turned out, the North Outlet Mall has a lot more of the shops we would have liked so we should have done more research and I would definitely recommend googling the malls so that you can decide which one suits you best.

The Mob Museum is the top attraction on Trip Advisor for Las Vegas and it is so easy to see why. The exhibits are so well presented and the information is clear and engaging. The only slight issue was that it was pretty busy (we went at midday) so I would recommend going at a different time of day. It was a great thing to do and I would recommend it to anyone going to Vegas who has a passing (or keen!) interested in organised crime and the Mafia.

I have to say, we didn’t have a particularly wild time in Vegas. There were only two of us so we were not rivalling the many Stag and Hen parties (or Bachelor/Bachelorette parties as I guess they would have said!) that were surrounding us, but we made time to sample a ‘few’ of the bars! The Ghost Bar in The Palms was probably the highlight of the different places that we tried, but again there are so many great bars to choose from that you will be spoiled for choice. The view at the Ghost Bar is what makes it a winner for me (even if the Barman’s knowledge of Gin and Tonic was not up to British standards…)

Vegas was so much fun and it was the perfect finale for our American Road trip. I love the opulence and the tackiness of it all and I will definitely be back many more times! One of my favourite things that we did during our time in Vegas was the Pink Jeep Tour of the Grand Canyon but as that’s not actually in Vegas, I decided to cover that in my next post so you can read about it here.